The word eggplant was originally applied to the white cultivators because they’re shaped just like an egg! See stunning images and learn all about white eggplants, from the different varieties to how to cook with them!

Eggplants are a spongy absorbent fruit. Yep – they’re technically a fruit, botanically defined as a berry and typically used a veggie in cooking! They’re a plant species in the nightshade family, Solanaceae. This family also includes tomatoes, potatoes and peppers. Like the tomato, its skin and seeds can be eaten, but, like the potato, it is usually eaten cooked.

Eggplants comes in all different colors, shapes and sizes. Although most commonly associated with the color purple, various eggplants varieties are all white!

Where does the name EGG-plant come from?

Around the 1700’s in England, a new plant appeared on the culinary scene. It was white, small and shaped like an egg. Hence, it was named… eggplant!

The name, which originated to describe these white cultivators, endured and came to also encompasses the more common purple varieties as well.

What are White Eggplants

White eggplants refer to any cultivator of eggplants whose skin is the color white. There are many different varieties, from old heirloom ones to much more recently cultivated hybrids.

Season: Summer
Nutritional Value: white eggplants are high in potassium and also offer some B vitamins, magnesium, and copper.

White eggplants are native to India and Bangladesh, where they continue to grow wild and have been cultivated since ancient times. They were then spread to Asia and Europe via trade routes.

Today, white eggplants can be found in specialty grocers and farmers markets in Asia, Europe, and the United States.

The most common cultivators of white domesticated eggplant used for culinary preparations include:

These cultivators, all white skinned eggplants, range in shape and sizes; from a small plump teardrop or roundish shape to thing long ones.

The white ornamental eggplants are solely used for decoration.

Size: in terms of size, white eggplants are generally smaller than purple ones. (Though there are teeny tiny itty bitty cutie purple eggplants too!)

Flesh: white eggplants have white creamy color flesh whereas the flesh of purples ones have a greenish hue.

Taste: in terms of taste, white eggplants are less bitter, creamier and denser. Their flavor is a bit more delicate and these differences are quite subtle.

White eggplant is similar enough in taste to purple that they can be interchanged in any recipe.

White eggplants, similar to their purple counterparts, and best enjoyed cooked. They become creamy and milk with a light, sweet flavor.

Neither the soft seeds nor edible skin needs to be removed.

This fruits, that’s generally treated as a veggie, is most commonly purple and popular in cuisines all over the world.
Hope you’re inspired to seek out the less common but no less spectacular white variety!

Stoked on white eggplant? I’d love to hear about it and see your white-a-licious eggplant creations too! Please leave a comment below and take a pic and tag it on Instagram with  @DanielaGerson. 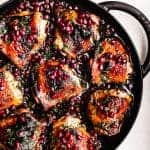