Celebrate the quintessential flavors of fall with this colorful and rustic apple galette!

Why This Recipe Works

Ya know fall is here when apples can be found in every color of the rainbow! They even come in hot pink! Generally, supermarkets tend to carry the same exact 5-10. Head to your local farmers market to find apples in all their glorious variations!

How to Make this Recipe

Don’t worry about precision or even-ness rather embrace galettes inner chill! Whatever shape it rolls out to be is perfectly imperfect!

Note: This recipe calls for apples but almost any firm fruit in season such as pears will work too! Just keep in mind that tart fruits need more sugar that sweet fruit.

Cinnamon: Not all cinnamon is harvested equally! Cinnamon is separated into two main categories (though there’s hundreds of types): cassia cinnamon and Ceylon cinnamon and yes, they taste and smell differently.
Most of what we call cinnamon in the US is cassia cinnamon from Indonesia (there’s also Chinese and Saigon cassia). It’s bold and sweet and spicy.
Ceylon cinnamon, commonly called “real” cinnamon, is native to Sri Lanka. The flavor is much more mild, subtle and delicate and far less spicy with warmer floral notes.
Know where your cinnamon comes from!
For this recipes, I used Spice Tribe’s organic ground cinnamon, Cinnamomum cassia, known simply as “cassia,” is from farms in the Padang region of Western Sumatra, Indonesia.

Nutmeg: This nutty, slightly sweet and intense spice has a strong and distinct aroma and comes in two forms: ground or whole.
It is the seed from a dark-leaved evergreen tree, which is also cultivated for mace.
For best flavor, always grate fresh nutmeg! It will impart a fresher, cleaner taste than using the pre-ground stuff.
For this recipe, I used Spice Tribe’s organic nutmeg kernels from the fruit of the Myristica fragrans tree native to Indonesia.

These wildly fragrant spices, associated with fall, will keep your cozy and warm all season long!

Check out this stone fruit galette, berry galette and tomato galette (yes galette's can be savory too!)

Have ya tried this recipe? I’d love to hear about it and see it too! Please leave a comment below and take a pic and tag it on Instagram with @DanielaGerson. You can also follow me on Facebook, Instagram and Pinterest to see more colorfully delicious food and all sorts of awesome adventures! 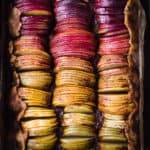 For the Apple Filling

Did you make this recipe? Please share and tag @DanielaGerson! I'd love to see how you're making colorful waves in the kitchen!
« All Red Okra Things
Cranberry Chicken »