×
You are here: Home / Adventure / Surfing in Israel
0 shares

My story of learning to surf in Israel, at Hilton Beach in Tel Aviv, and becoming part of the rad Israeli surf scene! 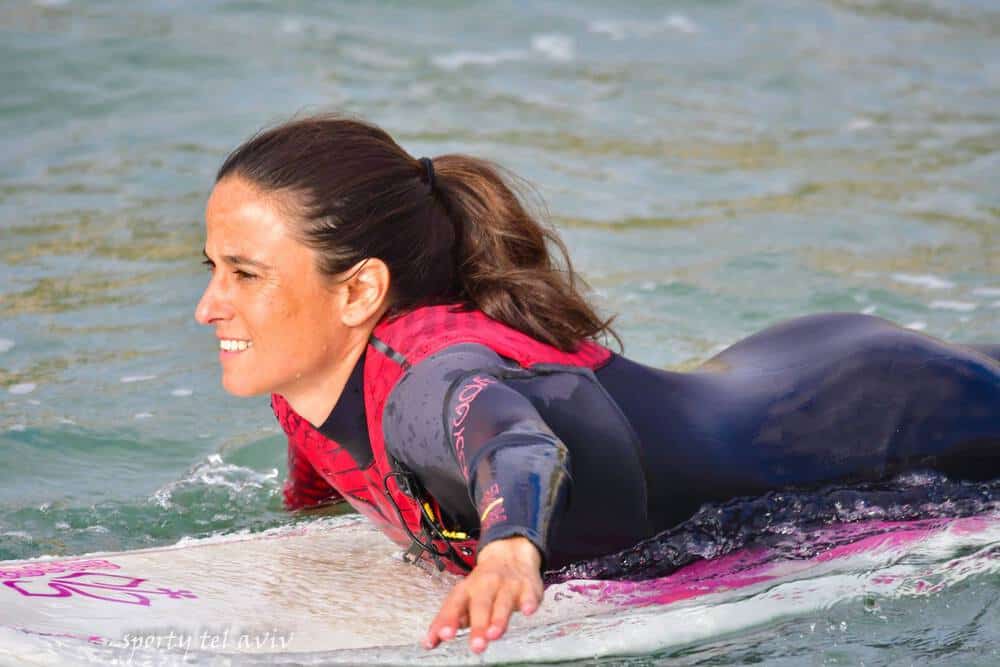 I learned to surf in the Israel.
Yep, born and raised Cali girl. Or between Cali & Mexico City to be more accurate. But never surfed in Cali. Ever.
A small fraction kids in our high school surfed. Also know as the surfers.
I remember it seemed so intense. The wetsuit. The cold water. The sharks. The strong current.
And it’s Nor Cal folks. Not as if you’re generally just chillin’ on the beach anyways.
It’s simply to damn cold. We ain’t So Cal.

Then I went to Israel for 6 weeks and stayed for 6 years. Story for another time.

After living there for 4 years, a girlfriend from Cali was in town for a month. And she kept talking about surfing in Tel Aviv. And raved about it. On and on. And it got me thinking…

A bit more background: I lived 3 blocks from the beach in Tel Aviv. Straight left out my front door and 3 blocks later, I’d be at Hilton beach.

And we hung out at the beach. All the time!!!

The entire beachfront is lined with restaurants and cafes. And filled with sunbathers.  And of course, matkot players

And out in front of us all, in the water, were surfers.

In the summer, no wetsuit. No sharks. Warm water. No current. So close to the shore that they could hear the tunes from the beach! And the sounds of the matkot ball going back and forth.

Surfing in Tel Aviv did seem intimidating at all. Not in the way it did in Cali…

And there were surfing lessons in Tel Aviv! At Topsea!

They sold them in packs of 3 for adults. The idea was that you take 3 lessons and then surf on your own.

The weekend is Fri-Sat there and the adult lessons were at 10am on Friday.

I took my 3 lessons. But didn’t feel in any way ready to surf solo.

The hardest part of learning to surf is reading the waves.

When I’d paddle out with an instructor and he’d tell me when a wave was coming and when to start going for it, I’d catch it no problem!

Then I’d try paddling out by myself. And couldn’t figure out where to sit. What was a wave? When to start going for it?

Catching waves is unequivocally the most fun part of surfing for me! And I knew with just some wave reading help, I’d be catching lots more.

Most of the other adults I met in the lessons would take their 3 classes and slowly but surely give up. I tried to befriend other newbies to go out together. It worked for a bit but I was hungry for more. A lot more! I wanted to start surfing on the regular! (or as regular as possible in Israel). To become a surfer!

Do I sign up for more of the Fri 10am adult classes I wondered?

Around this time, I noticed a group of kids (6-12 yrs. old) surfing every Fri with my surf school at 3pm. And noticed that they were total shredders and had no fear!

Many adults would go for a wave, wipeout, and take quite a bit of time to muster up the courage to try again.

But not these kids! They’d just go, go, go. Wipeout or not, they were super stoked and just kept going. And truth be told they surfed much better than the folks in the beginner adult classes.

Who were these kids I wondered?!?!

I asked at the Topsea surf school and they were the kids surf club. School in Israel is 6 days a week (Sun-Fri) with a half day on Friday. And these kids knew how to surf. Most of them had been in the club for years. They were simply too young for their parents to feel comfy with them surfing solo.

Could I join the kids surf club I wondered????

Truth be told, the 3pm Fri slot was wayyyyy better with my schedule than 10am cause at this point in my life I was quite the rager and would often go out on Thurs until the wee hours of the night. We weren’t in SF were spots close at 2am. Rather it’s quite European and nightlife doesn’t even begin to get started at midnight.

My pitch went something like: I’m committed, I want to surf, those kids look like they’re having a blast, can I please try joining?

And just like that I became part of Topsea’s school kids surf club.

Around this time I started surf traveling. First Morocco. Then Bali. Then Sri Lanka. Then Portugal. Wayyyyy pre I even knew what social was and none of those trips are documented. But they sure did happen!

And I got much better at surfing!

And then I noticed a crew of teenagers, some of them my instructors from the kids club, training on weekdays. Who are they are wondered? What’s that crew???

So I asked Topsea Surf School. And found out they started a high school surf team. That meets twice a week after school. And trained for surfing. And surfed.

Could I join the high school surf team I wondered? No seriously, could I? I’d obviously never compete. Just to make sure we’re on the same page, I was 29 years old at this point. But there was no adult surf team in Tel Aviv that trained…

So…. could I join the high school one???

Once again, there I was pitching Topsea. Could I join the high school team pleasssssse? I had to pass a physical test (cause the team would run and train intensely). I passed with flying colors and was let on.

It only got slightly awkward when I asked my boss for permission to leave work early twice a week to go train with my new surf team. We met at 3pm. How does that work with everyone else’s work scheduled he wondered. Well….. I explained…actually every else is still in high school.

And then on the occasional days when there were no waves and instead of training our coach decide we’d play an impromptu soccer match. Me playing soccer with a bunch of high school dudes. I’m not a fan of sports of playing sports with balls and was the only time I felt slightly out of place!

A bit about Surfing in Israel

There’s surf in Israel? Why yes, there is! Any where that has a coastline has potential for surf! In Israel, we are surfing on the Mediterranean and its all wind swell. I’d say every 2-3 weeks there are 2-3 surf-able days. Sometimes more. But when there’s no swell, the Meditarrean is flat as a pancake, still as a lake.

I surfed mostly in Tel Aviv. The two main spots are on opposite ends of the beach. I learned on the North End, Hilton Beach and Maravi beach. The other spot is on the south end, Dolphinaroum Beach. They rent equipment on both ends, but I’m a Topsea gal all the way!

Herzliya also has some good surf beaches. I shredded there too. And the entire coastline is lined with spots!

How Surfing came to Israel

Surfing was introduced to Israel in 1956, when the late Jewish surfing legend, Dorian “Doc” Paskowitz brought what is believed to be the first surfboards to the country. He visited for a year, bringing a bunch of longboards decorated with the Star of David with him.

He found a kindred spirit in n Shamai “Topsea” Kanzapolski, a lifeguard who was willing to take on the challenge of growing the sport in Israel.

Topsea was founded in 1957 by the legendary Topsea, who is credited with spreading his infectious love of surf in Israel.  50+ years later, Orian, the youngest son of Topsea, runs the center carrying on with the traditions and legacy of his father.

The Topsea Surfing Center is the first of its kind in Israel and was set up to provide a one stop shop which caters to the needs of every surfer at every level.

Their main goals are to promote the sport of surfing and at the same time to raise awareness of the environment so that the sea and the coastline are protected.

Topsea is my home away from home in Israel. My community. I adore this place!

Back to My Story

I grew in so many ways from being on the Tel Aviv surf team, as a surfer, as an advocate for the ocean, as a community member.

And then the time came for my to leave. I was finally moving back to Cali, after being gone 12 years and in Israel 6. And 10 days before…

The Kite Surfing Lesson that ended with 5 broken and shattered vertebrates.

My love of surfing inspired me to explore other water sports. I decided to try kite surfing. Wind is the enemy of surf. When it’s two windy to surf I’ll kite I figured. Made perfect sense! I signed up for 5 private lessons with Amit Inbar, an Olympic medalist in kite surfing. I figured he def knew what he was doing! Kite surfing is dangerous and I did my research to be safe! All signs online pointed me to Amit Inbar’s spot in Beit Yanai.

And then they were negligent. And I ended up immobilized in the hospital told I may never walk again with 5 broken and shattered vertebrates.

7 vertebrates fused together later, I left the country in a wheel chair with both my parents. But not before saying good bye to my team mates at Topsea!

My return to Surf In Tel Aviv

6 years later, I returned to Tel Aviv. To Topsea. To the surf. My teenage team mates were young adults by then! Post army age. Very handsome young men!

The images below are from my return to Israel, in the spring of 2018.

That’s my story. How I learned to surf in Israel. I started when I was 28 years old. In the Middle East.

You can’t stop the waves. But you can learn to surf!

YOU CAN DO IT TOO! 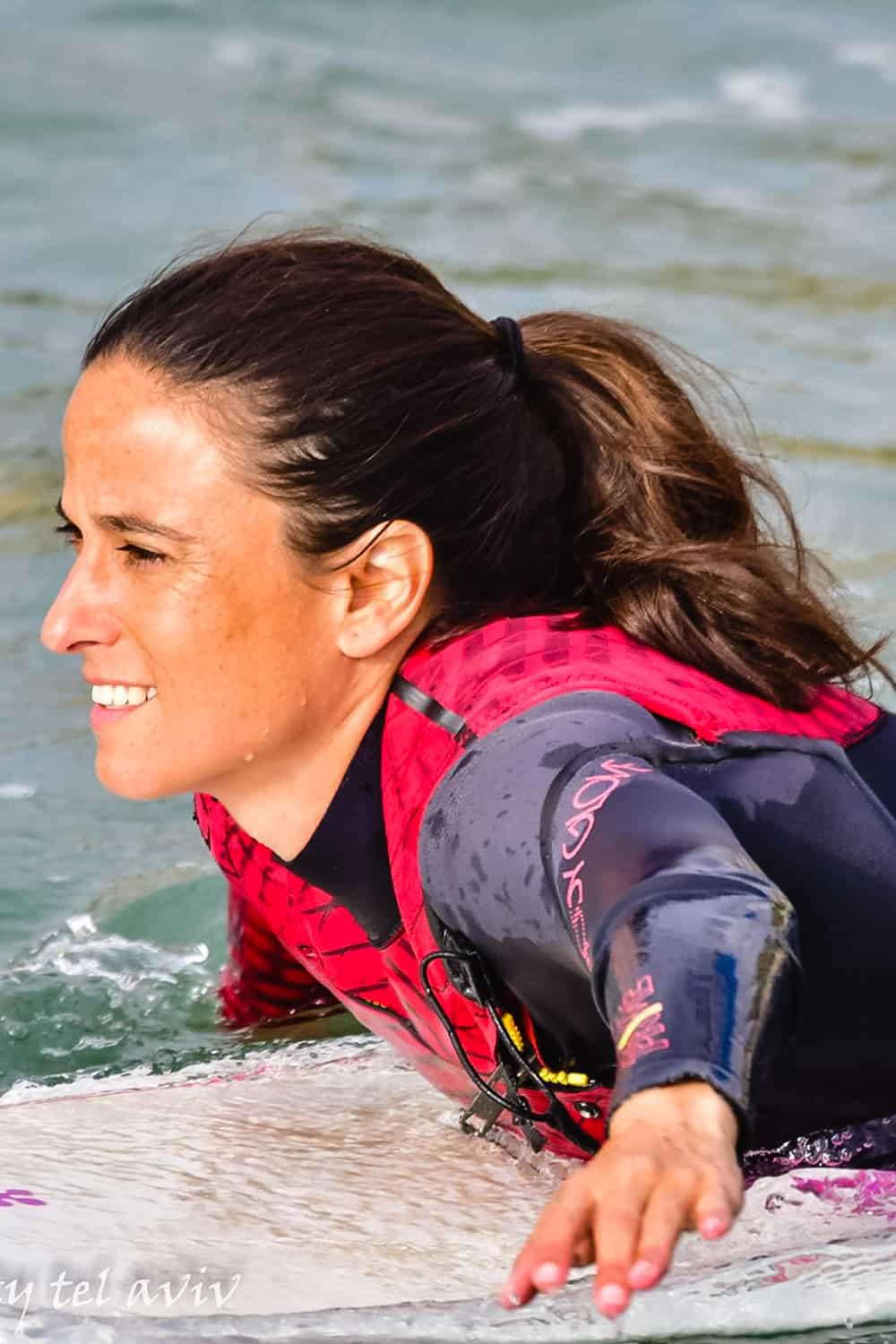 Have ya enjoyed this post? I’d love to hear about it! Please leave a comment below and if you're in New Mexico take a pic and tag it on Instagram with #wavesinthekitchen cause I'd love to see it! You can also follow me on Facebook, Instagram and Pinterest to see more colorfully delicious food and all sorts of awesome adventures!