I’m jumping on the fall pumpkin bandwagon! Seems like all over my social media everyone is talking about how fall is there favorite season and they’re so stoked for fall everything. Full disclosure: Fall, I love and appreciate ya, but you’re def not my favorite season! I don’t think it’s a big secret by now but, summer, def. Those summer south swells…anyhow don’t think I should go too deep into my love of summer just as I’m announcing that I’m embracing fall and creating my first ever pumpkin recipe blog post, so back to the bread pudding. 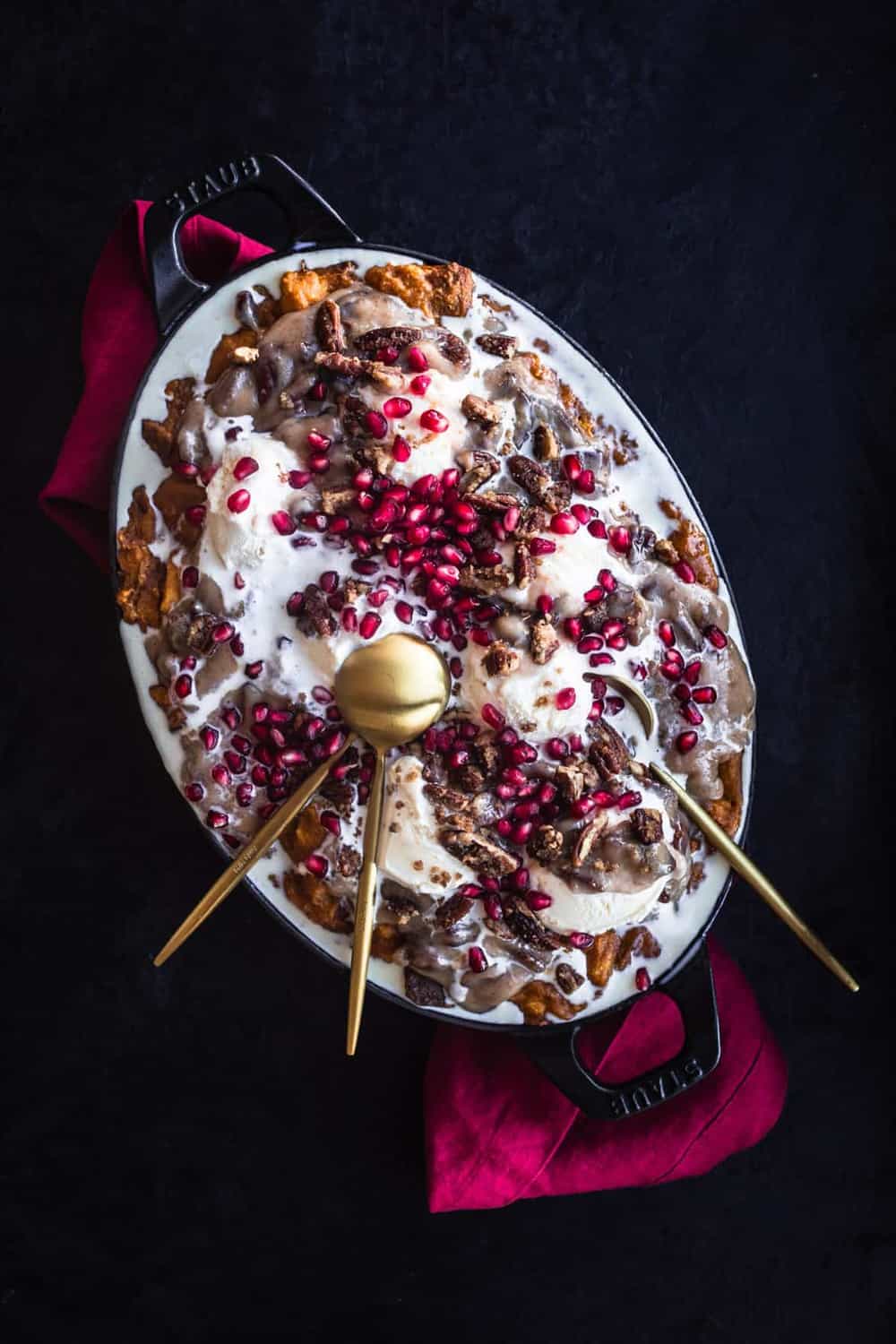 The thoughts behind this pumpkin recipe go like this: I have a favorite pumpkin pie recipe I make every year (I mean every year since I started cooking that is which really wasn’t all that long ago…).

The secret to my very delicious pumpkin pie is that it’s actually half squash (there’s a full can of pumpkin and squash puree in there) mixed with fresh ginger, nutmeg and cinnamon and cooked on the stove. Its so soo sooooooo good! There’s something so nourishing, warming and comforting about the taste of fresh ginger too. And it kinda makes the whole dessert taste healthyish. So I decided why not try adding some toasted brioche cubes, lose the crust, and turn it into a bread pudding with pecans?

And then I thought that I might be able to spice it up a bit more than that, which is where the bourbon (or whisky) cream sauce with pecan streusel came in. FYI….all these thoughts happened during a surf sesh in Japan! See why I must surf and it’s part of ‘work’ for me? I get some of my best inspiration in the water! There I was, surfing in Japan thinking about how to embrace all things pumpkin and fall upon returning to Cali and this pumpkin bread pudding idea is what I came up with.

The day after I landed from Japan I started experimenting. I brought the first creation to my date the night I landed. As in I landed in the morning, went straight to the grocery store to cook, style and shoot this (that’s how excited I was to make it!) and went on a date that night. Pretty new date and I thought perfect! He can taste my creation on the date, give me feedback and then if we go on a date again I’ll bring him the second attempt at this bread pudding too and get feedback again. Not sure if he was as excited about this idea as I was. But when you live alone you’ll take any taste taster ya can get… And who wouldn’t want dessert brought to them on a date? And if you don’t, then in all honestly we’re prob not gonna work out anyways. Whether using your dates as taste testers is a good idea or not…. well, the jury is still out on what kinda idea that is…

Anyhow, he did give me feedback and I tweaked it,made it one more time and got some more feedback. He actually just said it was perfect the 2nd time around and wasn’t all that helpful to be honest… But I had enough to share with quite a few friends, so I got more feedback and made it yet again but decided to not give it back to that same date yet again as I did think a 3rd time could be slight overkill. The 3rd one is absolutely delicious. I made it for my dinner guests last night, actually it was my buddy whose father I live with in Kauai and who ate the very first pumpkin pie I ever made, the one that inspired this recipe to bring it full-cirlce, and I’m snacking on it right now as I write this. 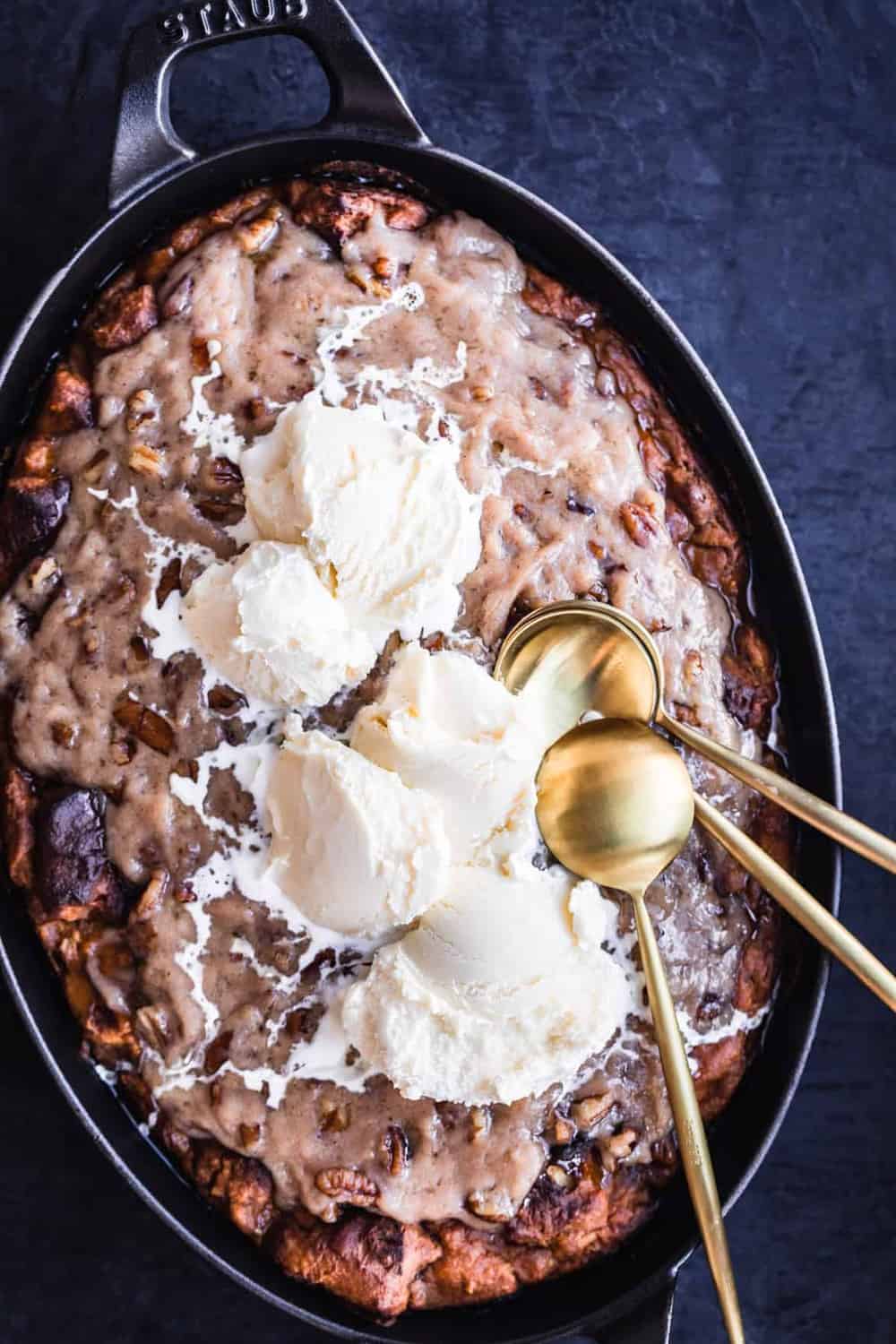 This is a perfect pumpkin dessert when you want to deliciously and easily feed a crowd. The bread pudding can feed 15, be made ahead, and it’s pretty fail-proof. Or don’t feed a crowd and snack on leftovers and share with friends the week after ya make it, which is a bit more the way I’ve been going...It’s the bread pudding that keeps on giving, and if I’ve seen you in the last few weeks it’s very likely I’ve brought you a piece. If I haven’t and you’re local, let me know - I have more than half left in my fridge as I made it for only 2 people that came over last night…pumpkin bread pudding for all!

To walk ya through the steps a bit: the squash, pumpkin, sugar, maple, ginger, cinnamon, nutmeg and salt are cooked on the stove. The eggs, cream, milk and vanilla are whisked. The cream mixture is mixed with the pumpkin mixture, pushed through a strainer, tossed with toasted bread cubes, mixed with pecans and put on the stove. Cream and sugar is heated up, on another pan butter is melted, and pecans, sugar, flour, salt, and bourbon are added making a streusel. The streusel and cream mixture are combined and you’re def gonna want to taste this bourbon cream sauce and lick the spoon. I love serving the bread pudding warm, straight out of the oven with cold ice cream. The pomegranates are optional. Pretty straightforward…right?

I’ve only made it with brioche but other types of bread will surely work. If you experiment with another kind of bread please let me know in the comments below, as I’d love to know! And feel free to play with adding other spices (perhaps cloves or cardamom) and let me know how that goes too! Let’s embrace fall and all things pumpkin and…

Let’s make waves in the kitchen!

Have ya tried this recipe? I’d love to hear about it and see it too! Please leave a comment below and take a pic and tag it on Instagram with #chefdanielagerson. You can also follow me on Facebook, Instagram and Pinterest to see more colorfully delicious food and all sorts of awesome adventures! 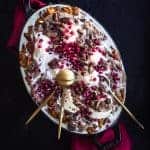 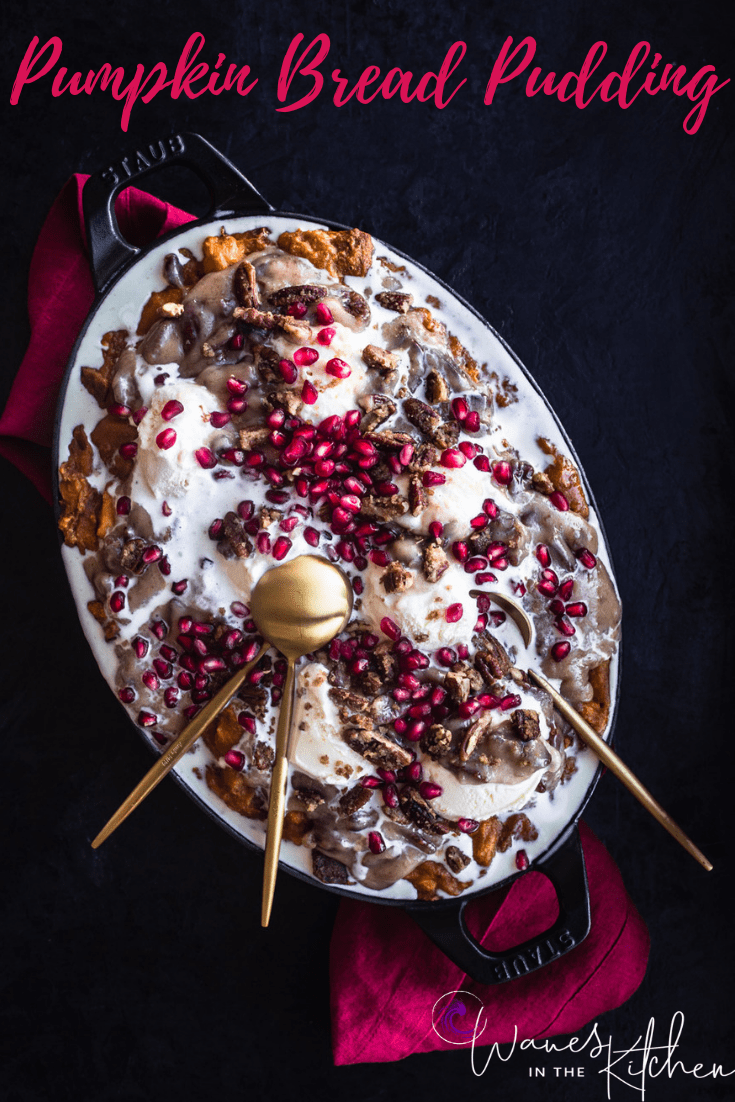 In the food photography & styling world, I do both.
I’m self-trained in everything I do: chef, food photographer, food stylist, and recipe developer. I’m not trained in a particular photographic or food style; I’ve arrived at my own. It’s why I’m unique.
I’m on a mission to help people see how sexy vegetables are—by sourcing the most colorful produce imaginable from local farm markets and emphasizing the beauty of real food in utterly enchanting food photography.

Welcome to Waves in the Kitchen! I’ll be sharing delicious recipes, sprinkled with surf adventures, inspiring ya to live a more healthful plant filled life, filled with joy and gratitude.
Learn More About Me