Eat the rainbow with this bright, colorful, and healthy salad filled with seasonal California produce.

Food tastes best grown in its own season.

Make this salad with ripe melons, tomatoes, and other produce at the peak of its season as it won't be nearly as good if made with out-of-season ingredients. Use the best of summer’s fruits and veggies you can find, sheep's-milk feta, fresh herbs, spices, and a lime vinaigrette or use another dressing of your choice.

This salad recipe is more of a guideline for how to create your own seasonal rainbow salad. It's what summer cooking is all about – highlighting fresh and local produce, at the peak of their season, in an easy way with minimal prep.

It’s the summer salad that celebrates every color of California’s produce rainbow!

CALIFORNIA IS THE LEADING AGRICULTURAL STATE IN THE NATION

Summer’s is prime time for produce in California, with the most impressive harvest in terms of variety. The over 700 farmers markets in the state are overflowing with an abundance of juicy produce, at the peak of its season, and bursting with flavor.

The Golden State grows one-third of the veggies, two-thirds of the fruits and nuts, and over 80% of the wine in the nation. Our agricultural abundance includes more than 400 commodities.

I love Cali for its produce and adore the summer season most of all!

California is the highest producing state in the nation of both melons and tomatoes.

Melons and tomatoes are the star of this version of the rainbow salad show.

They’re in peak season in California July through September.

The arrival of summer brings a bounty of melons varieties in all sorts of colors and sizes. Native to central Asia, the melon plan has been around for over 4,000 years.  There’s nearly 40 varieties including Watermelon, cantaloupe, honeydew, crenshaw, canary, casaba, sugar melon, Piel de Sapo and many more.

Although melons are grown throughout the state, most of our crop hails from the San Joaquin and Imperial Valleys.

Culinarily a fruit, melons are botanically a veggie. They’re in the cucurbit family related to cucumbers, squash, zucchini, and pumpkins.

There’s two main families of melons: those with rough, netted, or reticulated rinds (muskmelons, cantaloupes, etc.) and those whose rinds are baby-smooth (such as honeydew).

The most grown varieties are Cantaloupes and honeydews, with the state ranking first in the nation in the production of both.

Different colors provide different health benefits and eating a wide range of colors maximizes the variety of nutrients we’re consuming. The most vibrantly colored fruits and veggies are also the richest in vitamins, minerals, fiber, and antioxidants.

What You Need for Cali Summer Rainbow Salad

Summer in a bowl: salty and sweet, with a hint of acidity.

Melons – any variety and heirloom variety works. To find the sweetest and juiciest melons, check out your local farmer’s market. Look for dense, richly colored, and deeply aromatic melons in the summer. They’ll be in a whole different league than the bland ones often found at the supermarket.

Tomatoes - any variety and heirloom variety works. They’re more than 15,000 known varieties of tomatoes.  They range in flavor range from mild too sweet to tangy and even smoky, with vary degrees of acidity. Head to your local farmers market and find heirloom tomatoes can be found in every color of the rainbow!

Feta – Look for sheep's-milk feta, which tends to be to be creamier and tangier than domestic cow's-milk versions.

Pro Tip: Buy feta in blocks. It's much more flavorful and consistently higher quality than pre-crumbled.

Fresh Herbs such as basil, cilantro, parsley, mint and more add a pop of color and freshness.

The deliciously healthy salad packed with nutrients is gluten free and perfect for a light meal or as a side. Omit the feta to make it dairy free too.

Let’s make waves in the kitchen!

This post was proudly made in partnership with California Grown. All opinions are my own. California Grown is a 501c3 dedicated to connecting Californians with the people who grow and produce their food. 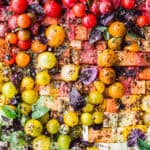 Did you make this recipe? Please share and tag @DanielaGerson! I'd love to see how you're making colorful waves in the kitchen!
« Loaded Hummus
Stone Fruit Galette » 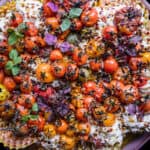